How to Recognize Competency

On the steps to competency, the unconscious incompetent is usually the first step.  Picture a new grad who thinks he learned everything there is to know about a topic from his professor.  That student usually gets his or her eyes opened widely the first time they try to apply what they learned on the job.

Once that new grad becomes aware of his incompetency, that is usually enough to inspire him to learn and get better (assuming he likes what he does).  The more he learns, the more proficient he will become until he gets to the point where he feels competent. He is able to recognize the criteria (e.g., context, availability of resources, etc.) which affect the approach he will take.  And after practicing for many years, he eventually becomes unconsciously competent. He doesn’t have to think about it, he just does it naturally. 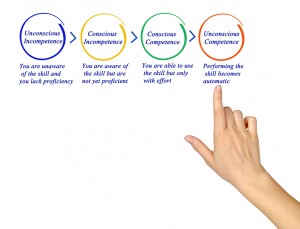 Occasionally, I have met seasoned professionals who are experts in their field and yet they make the mistake of thinking their expertise carries into other bodies of knowledge.

Picture the senior coder who claims to know accounting because she built a program for accountants, or the experienced executive assistant who thinks he can run the company because he has seen the CEO do it for years.

One thing I know about true experts, is they realize how little they know and how much there is to learn in their own fields, and they presume other fields have the same depth and breadth.

Helpfully, most regulated professions have a code of ethics which hold members accountable for ensuring competency prior to practicing.

So if you are looking for someone who is a true expert, look for signs of competency.  Look for:

A designation, a proven track record, honest dialogue about what he knows and can do, and humility.

After all, a lion doesn’t have to tell you it’s a lion.