If you have worked in an organization that uses email, then chances are you have received or maybe even been the tosser (pun intended) who sent out an email grenade. 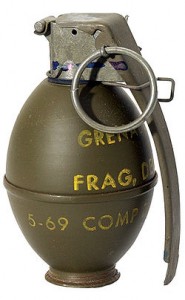 The accusation filled rants come out of the blue and rip a hole in the foundation of the employment relationship not to mention the collateral damage on interpersonal relationships. Email grenades are destructive, and in the workplace, the damage and shrapnel always come back and hurt the person who sent it.

Saying that, after years of slogging in the trenches (it is amazing to me how easily war analogies emerge from the workplace), it is understandable why frustrated and demoralized employees want to lob one of these grenades over at the people who have proven to be their “enemies” for so long.

However, email grenades are and should be a career limiting move. They are never a constructive way to put forward an idea or argument, even if the idea or argument proves to be right in the long run. While these verbose bombs clearly indicate the presence of anger and often a sense of helplessness or lack of options on the part of the sender, don’t be surprised if observers of an email grenade in action will perceive the sender to have:

I’ll talk more about what to do about an email bomber in the next blog, but in the meantime, if you’ve ever sent or received an email grenade, we’d love to hear more.